In my last blog, I introduced the Leadership Compass. I outlined how leaders can use the Compass to understand their communication preferences so that they can more consciously choose behaviours that will exert greater influence on others.

I explained how reflecting on your behavioural preferences is empowering, and that by practising self-awareness and different approaches, leaders can develop a flexible palette of communication skills to cover a huge range of situations.

So, now that we know about the Active-Passive and I-We dimensions, it’s time to consider how they tend to play out in the workplace. Hopefully, it will help you understand why certain approaches trigger different responses in others so you can focus on what will make others want to follow you, happily.

Let’s look at the different quadrants of the Leadership Compass, then, each of which represents a different class of behaviour types. 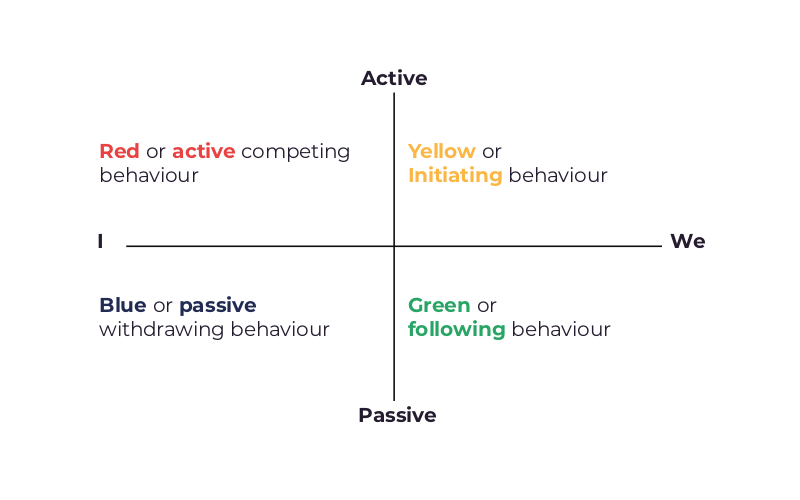 Both Active and I-oriented, Red behaviour can be considered assertive, even passionate.

Let’s take Rupert. When he is in his role as an expert he often is a great example of such competitive communication – he’s generally the first to express his ideas in team scenarios. Often, in great depth, so others don’t have much of a chance to chime in.

His co-workers sometimes describe his behaviour as aggressive; he can be heard saying things like, “As a seasoned expert in this field, my idea holds the most water,” or “Because of A, B, C, and D, I’m sure I’m right.” Sometimes, he’ll go on to list reasons E, F, G, and more, causing others to withdraw, clam up, or even disbelieve him.

As a combination of Active and We dimensions, yellow behaviours are proactive and involve showing initiative.

Never forgetting that behaviour and personality are fundamentally distinct – let’s meet Rupert and examine some of his communication tendencies.

In the workplace, Rupert’s often is also leading group or team efforts by clearly stating his opinions. He knows what he wants to achieve and doesn’t hold back in expressing that, but now when not being the expert in all of these things, he’s also careful to include others.

You might hear Rupert asking his teammates: “Will you tell me what you think about my suggestion?” or “How would you approach the situation? I’d love to know!”

When asked, others describe these behaviours as constructive and supportive.

Considered Passive and We-oriented, Green behaviours can be thought of as constructive following. For instance, sometimes Rupert feels more comfortable co-creating with others but still giving some input – This often happens when he is not familiar with the topic an and when he is secure that others are there to support and help him.

Then, he can often be overheard saying things like: “Can’t wait to hear your input!” and “Sure, looking forward to your plan!”

It’s why his teammates, in turn, feel no hesitation being more active in their conversations, offering their advice or giving instructions. Rupert’s there to help and support!

This is an I-oriented, and Passive quadrant. If you’re typically quiet, like Rupert can be sometimes, you may tend toward Blue behaviour.

When Rupert does not trust people, he isn’t very forward when he disagrees with his colleagues. Rather, he keeps his dissatisfaction to herself and would rather not argue or debate. He’s not much of a talker, so we don’t have too many quotes from Blue Rupert, but others often assume he’s dubious about their intentions.

Sometimes, when his behaviour is mainly Passive, others feel the urge to become more active around him. They may try to provoke action or get frustrated, sparking conflict.

As we see Rupert shows different types of behaviour in different situations. However as his personality is quite active and dominant, he most often gets stuck in red behaviour.

Do you see yourself as a Red Rupert? Perhaps you relate more to Yellow or Green Rupert instead? Or, on reflection, do you consider yourself more similar to Rupert in the Blue quadrant?

Once you’ve reflected on your preferences, a further, even more helpful exercise can be to seek out feedback from others. You’d be surprised at how many people don’t realise their tendencies until they hear collective input from teammates and co-workers! In my book, Mind Growing, I include some examples of just how eye-opening – yet empowering – these revelations can be in helping leaders strengthen relationships and influence others more effectively.

My next post will talk about the logical next step – how we can move ourselves and others from one quadrant to another to promote more harmonious, healthy team relationships.

In the meantime, why not have a look at my free videos and exercises for a quick daily check-up and inspiration?